If you happen to live in NYC, finding a good game of chess is almost as easy as finding a Starbucks. The chess mecca is not only home to great street chess but also to institutions like the Marshall Club in Greenwich Village. You can play chess in the spot where Bobby Fischer won the “Game of the Century” at age 13. Other members have included Howard Stern and Stanley Kubrick. Kubrick went from chess street hustler to launching his film career through contacts he made playing chess there. He then went on to pay tribute to the game over the course of his iconic films. 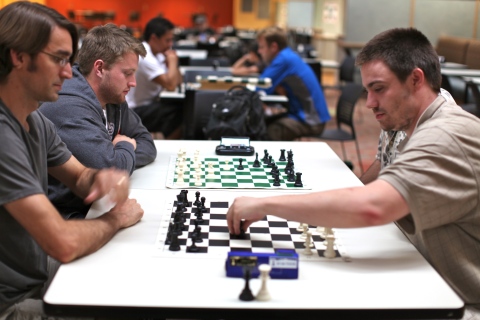 If you live in Boulder, options are a bit more limited, but there are options nonetheless! This week I visited the Boulder Chess Club’s weekly play at the CU campus. The crew was more than welcoming to a newbie like me. It was a good learning experience watching the various skill levels as well as fun to listen to the dry-wit banter being tossed about almost mirroring the games themselves. Julian, an expert rated player/physics grad student, even evoked a little Jay-Z: “I got 99 problems but a bishop ain’t one.”

While I wasn’t at a point I could play a real game against someone yet, the people there were both eager to teach me and patient in answering my questions. That is one of the incredibly unique things about chess. It can bring people from all walks of life to a table to learn from each other.

Maybe we should set out some chessboards on Capitol Hill as Congress continues to flounder in reaching some sort of compromise. Who knows what might happen!

You are currently browsing entries tagged with street chess at 52 To Do.