It pays to have a snow scientist as a neighbor

In exchange for feeding my neighbor Noah some of our delicious leftover goulash, he let me pick his brain about snow.  I was interested to see what I might learn that would give me a different perspective about it.

I love the people I meet in Boulder.  Dr. “Snoah” Molotch (pictured left, red jacket) is a snow hydrologist at INSTAAR and professor at CU.  You can think of him as a real life version of Dennis Quaid’s character in The Day After Tomorrow.

Noah’s particular focus is studying the distribution of snow and ice and its impact on natural resources.  He’s currently interested in how forestation & deforestation affect snow melt.  I learned quite a bit in talking with him, not only about the importance of snow but a few fun facts as well.  I’ll be getting back out in the snow tomorrow but thought I’d share what I learned about it in the meantime.

Snow is important because it acts as a natural reservoir. In the West, it accounts for about 75% of the water supply. Snow melt acts like a steady IV drip for when there’s little rainfall. One of the fears of global warming is that higher temperatures may cause it to rain instead of snow in Winter which depletes the resource when it’s needed later in the year.  I expect that Noah will single-handedly make sure that doesn’t happen.

Now onto the more light-hearted stuff… 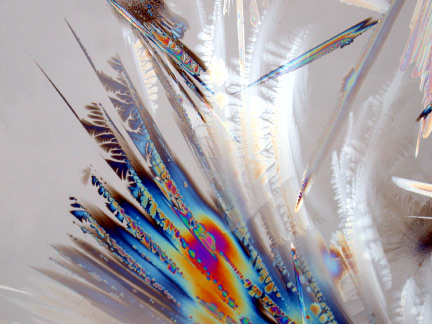 Why is snow white? Because of it’s composition of hexagonal ice crystals, it bounces and reflects the entire visible light spectrum back to us vs absorbing various wavelengths we see as color. Noah shared something a colleague of his likes to say to students: “if our eyes weren’t meant to just see visible light, snow would be one of the most colorful substances in nature.” I like to imagine what a landscape might look like if we could detect the colors in snow. The photo above is from a NASA scientist, Dr. Peter Wasilewski, who used polarized light sources and filters to show the color of ice. Even though I probably butchered this whole explanation from a scientific standpoint, his photographs are beautiful.

Most everyone has heard the saying “no two snowflakes are alike”. I always assumed that discovery was probably made in a lab somewhere.  However, the story of how it was discovered is as inspiring as the discovery itself.  In 1885, a farmer named Wilson A. Bentley in Jericho Vermont began photographing single crystals with a microscope adapted to a bellows camera. Seriously.

He would go on to photograph more than 5,000 snowflakes, never finding two alike.  What struck me about “Snowflake” Bentley was his philosophy & appreciation for design: “Under the microscope, I found that snowflakes were miracles of beauty; and it seemed a shame that this beauty should not be seen and appreciated by others.  Every crystal was a masterpiece of design and no one design was ever repeated. When a snowflake melted, that design was forever lost. Just that much beauty was gone, without leaving any record behind.”

You are currently reading It pays to have a snow scientist as a neighbor at 52 To Do.