I’ve learned a lot about the history of philosophy this week but I thought I would end the week thinking about my own philosophy.

Glee is one of those uniquely spectacular shows that reminds you there is still quality TV out there. In my favorite episode, Kurt & Rachel compete for a solo from the musical “Wicked” called “Defying Gravity”. It’s a beautiful song and a great episode about overcoming limitations. I’m not going to lie; it brought a few tears to my eyes.

Studying philosophy this week I think a lot of it boils down to us trying to make sense of our possibilities and our limitations. Where do we fall between those two things?

As a kid I started earning the nickname “Darcie Don’t” because I tended to get into things. My grandmother worried I’d never want to do anything with my life, so she started calling me “Darcie Do” instead which luckily won out in the end. It became a good identity to foster into adulthood that lead me to a lot of great adventures.

4 years ago I went through a very painful divorce and something changed. That experience was followed by an incredibly demanding job where I didn’t have much opportunity for levity. I lost my ability to see things the way I used to & even though I tried to hide it I became a fragile person living with a lot more fear, depression and doubt.

This year has been inspiring in so many ways, but there has been one experience in particular that has helped remind me that I’m not the kind of person to define myself by limitations. I started working with an organization called Paradox Sports and met Malcolm Daly who is an incredibly inspiring person to work with. As an organization they literally defy gravity, taking injured veterans and others with disabilities to places most people never see to do things like scaling huge walls of ice. Their events aren’t about helping disabled people feel “normal” but about reminding people of how amazing they are despite what’s happened to them or limitations they may live with. 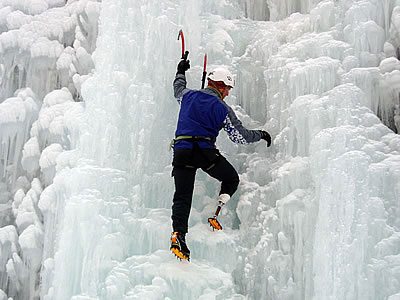 Every time I meet with Mal for coffee we end up looking out at the flatirons and he nudges me that he wants to teach me how to climb and get over my fear of heights. In honor of my new personal philosophy to “defy gravity” I guess this is me officially saying there will be a climbing week.

You are currently reading defy gravity at 52 To Do.