I had forgotten what strawberries should taste like until yesterday. It’s been so long since I’ve had a strawberry picked straight off the farm. Yesterday I went to Berry Patch Farms just outside of Denver. It’s a self-pick farm that not only had berries yesterday but also gorgeous flowers and pickling cucumbers you could pick. They also have amazing produce for sale inside the adorable barn.

It’s a fun thing to do with kids and yesterday I was joined by my friend Kelly and her berry picking master of a son, Darwin. At only age 2, he was a real trooper since even at 10 a.m. it was already in the 80s out there picking in the fields.

I will go to great lengths for fresh picked strawberry preserves. It may not be as fancy as a lot of the artisanal stuff out there, but it has to be one of my favorites for its simplicity. It’s just hard to beat, especially when you have strawberries as delicious as the ones we picked yesterday. 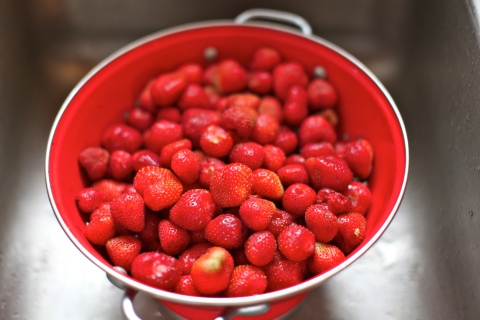 I’m not going to lie, I could have totally used a nap after only an hour out there picking, but my work was not done. (brief aside: anyone who has issues with immigration and migrant labor should go spend an hour picking strawberries in the summer heat. I think you may have a better appreciation for the hard work those people do day in and day out.) Back to the jam…

I used a simple recipe out of The Blue Chair Jam Cookbook for “Children’s Strawberry Jam”. This recipe was similar to others I found online.  It was very easy to make only requiring 3 ingredients: delicious strawberries, sugar (I forgot how much goes into this stuff!) and fresh squeezed lemon juice. I halved this recipe since the pickings were a bit slim at this point at the farm. I couldn’t have done 2 hours out there.

It smells pretty amazing as it starts to cook & thicken. It’s one of those things when people hear you’re making preserves it’s easy to conjure up helpers.  My friend Mary came over later and helped me out cleaning strawberries and stirring the jam. It’s always more fun to do this kind of thing with friends.

After a little over an hour I ended up with 10 cute little jars of preserves.  Of course some went to the helpers and others who stopped by in the neighborhood. 🙂 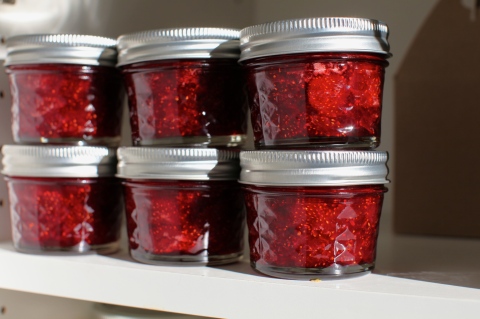 I enjoyed my first taste this morning on a flaky, warm croissant. Amazing!

You are currently reading Hand picked strawberry preserves at 52 To Do.