My grandma would be proud

As a kid I can remember my grandmother telling me to go down to her basement to grab a jar of tomatoes she had canned the previous summer. I knew that meant she was making her famous ribs, so I was pretty excited, but I also was afraid to go down to the basement by myself. They lived in an old house my grandfather built himself with creaking stairs and you had to make your way down part way in the dark because the hall light wouldn’t reach the whole way. I would hold my breath down the last few stairs, heart beating out of my chest, as I felt around the corner for the light and then breath a sigh of relief when I found it. I would then run to grab the tomatoes and run the hell back out of there. I still think basements are creepy.

I loved the sauce she would make with those tomatoes, so it was worth it. I always wanted her to teach me how to can and she’d always shrug it off saying it was so easy. What was there to teach? I think my grandparents generation took for granted how challenged we are with things like that today. Convenience has made us fairly inept at things that were simple to them. Today I made my first attempt, although I have no idea if I did it the way she did.

I bought a flat of tomatoes at the Munson Farm stand for $35 which had just been picked an hour before. I told myself this justified the fact it was actually more expensive to can than it would have been to just buy canned tomatoes. My friend Alicia came over and helped me out. First I blanched the tomatoes for 60 seconds in boiling water and then put them in an ice bath. The skins came right off and then we cored and quartered the tomatoes.

I also juiced fresh lemon juice to add to the jars. First we sterilized the jars and lids in the dishwasher and kept them there until we were ready to use them. We packed the tomatoes into the quart jars up to 1/2″. One flat yielded 7 quarts. We added 2 T. fresh lemon juice and 1 t. salt to each quart jar and poured some of the juice that had run off into the bowls over them. We filled the rest up to 1/2″ with the water from the blanching.  Using a butter knife we got rid of any trapped bubbles and then added the lids.

I processed them in a boiling water bath for 55 minutes. We had to add extra time for the altitude. 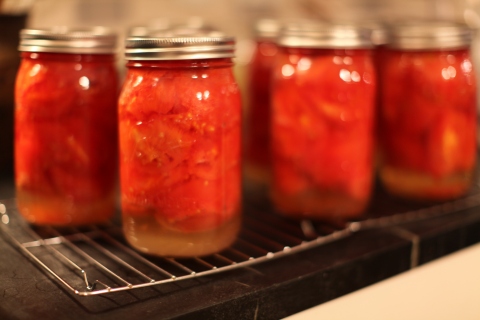 I have become much more comfortable with canning after this week and trusting that the jars are going to seal. My grandma would be proud of my first batch of tomatoes. These will be going in my kitchen pantry though so I can avoid any creepy basement encounters!

I think I am becoming a little addicted to preserving after this week. You’d think I was preparing for a hurricane or something. The East Coast has had a strange week to say the least with earthquakes and hurricane Irene. I was ready to supply my friends and family with reserves if they had needed them. Luckily I can keep them for now. 🙂

You are currently reading My grandma would be proud at 52 To Do.