The Curators of Cured

Not everyone who loves cheese to a professional extent goes down the path of becoming a cheese maker. Some become what I would call curators. They’re the voice of fromage, and, similar to curators of great art, expose you to a whole new world of styles, textures and flavors. They share their educated point of view and give you a greater appreciation for what you’re nibbling on. I’m lucky enough to live 3 blocks away from the most talented curators around.

Coral Ferguson and Will Frischkorn are living the dream as proprietors of Cured, a shop specializing in a hand picked selection of cheeses, cured meats, table wines and other unique grocery items. They spent years living in Europe, falling in love with the locally sourced,  neighborhood market way of living which led them to creating their own here in Boulder. To say I was happy when they opened this fall would be an understatement. 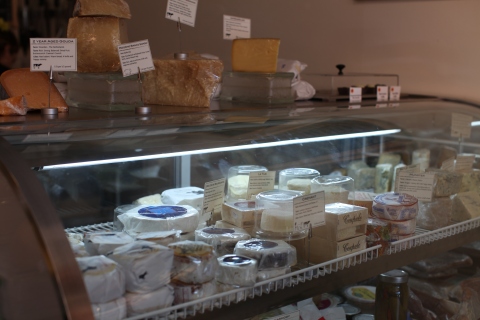 Will and Coral have traveled the country meeting with producers at the forefront of American cheesemaking and have been inspired by how cheese is evolving in the States. Artisanal cheesemaking has seen tremendous growth in the last 5 years. Coral and Will both agree that what makes it exciting is the fun, experimental side of cheesemaking here compared with Europe where it is more steeped in and restricted by tradition.

They shared that people in the US are not only making wonderful, traditional style cheese but making it their own. A good example is the sheep’s milk Cacio Pecora, from Fruition Farms, a local farm I visited yesterday. They’re also huge fans of cheese maker Andy Hatch at Upland Farms in Wisconsin (of course) whose Pleasant Ridge Reserve has won Best in Show 3 times in the past 10 years. It is divine.

Aside from making delicious cheese I asked them to tell me more about the cheese makers they meet. Who are they? They said about half they’ve met are from established dairy families and the other half are people for whom cheese making is a second career, ranging from ex-Wall Street guys to corporate attorneys. There’s a desire to get back to the land and a simpler way of life.

(photo: WSJ.com)
One such cheese maker they got a kick out of is John Putnam (above), owner of Thistle Hill Farm in Vermont. He is an ex-bankruptcy lawyer turned european alpine style cheese maker. After 17 years practicing law he made the switch full time. It took him 4 years to learn cheese making after several trips to Europe and the help of a French work-study student.

I toyed with the idea of getting into cheese making when I was working in advertising in Los Angeles but never followed through at the time. It’s good to know there are all of these people out there getting into the craft and tirelessly working to raise the profile of American cheese.

At Cured, Coral and Will link all of these amazing cheese makers together in a delightful neighborhood shop where one can stop by and explore the world of American artisanal cheese making a few bites at a time. It’s a pretty delicious world I must say.

You are currently reading The Curators of Cured at 52 To Do.