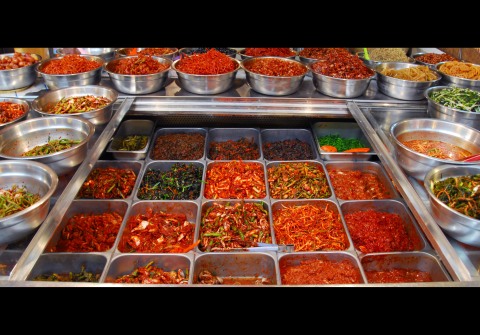 Ok, so this is one area I was going to cheat on the local rule of my blog as I was supposed to be in LA for work, but my meeting got moved, so Boulder it is! What’s the saying? Cheaters never win, winners never cheat?  I did find a couple of good resources locally for Asian food supplies.  In Denver, the Pacific Mercantile turned out to have what I needed and for produce I found fresh Napa cabbage at the Sunflower market (as well as all of my other pickling needs).

Unlike the lackluster campaign behind sauerkraut, the Koreans know a good thing when they have it and treat kimchi like a national treasure. In Seoul they even have a museum dedicated to kimchi to educate visitors about the almost 200 different varieties, from its history to the fermentation process to models of all the different varieties.  They’re so serious about it, that in 1996, they lobbied for an international standard that protected traditional kimchi, the crux of it being that the Japanese version wasn’t really kimchi and therefore shouldn’t be allowed to be called kimchi.

It’s also worth mentioning its health benefits.  Health magazine named it one of the 5 healthiest foods.  I’m thinking seriously about eating this everyday.  It is a high source of fiber, vitamins A, B and C, “healthy bacteria” called lactobacilli that aid in digestion.  Many have done studies that indicate it may even prevent the growth of cancer.

I’ll be making a basic kimchi recipe from the Joy of Pickling:

update: my friend Holly has let me know there’s a great Korean restaurant in Aurora that we’re going to check out thurs.  Korean BBQ SAE Jong Kwan.  Apparently Aurora is the place for Korean food.

§ One Response to Kimchi: your new daily vitamin

You are currently reading Kimchi: your new daily vitamin at 52 To Do.