a bear hug from Bikram 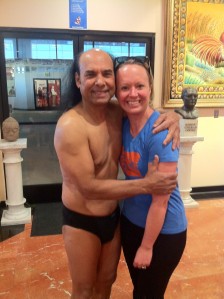 That’s me and Bikram Choudhury, the founder of Bikram Yoga. If you read about Bikram you might think he’s the real “spiritual gangsta”. He’s definitely one of the most fascinating yogis. He’s not shy and has been quoted as saying “I have balls like atom bombs, two of them, 100 megatons each. Nobody fucks with me.” He’s been aggressive about copyrighting his “26 pose hot yoga” practice. He owns more than 40 vintage Rolls Royces and Bentleys, some owned by the Queen Mother and the Beatles. Some might wonder how this ego plays out in the world of yoga?

If Steve Ross’s Happy Yoga was associated with the Hindu God of Ganesh, then I would say Bikram’s style  would be more associated with Shiva, The Destroyer or Transformer. He’s on a self-proclaimed mission to save lives through yoga. I’ve only read a few pages so far of his book, but he talks about his love of cars & yoga. What the media doesn’t mention is that he rebuilds all of his vintage cars himself since he worked as a mechanic throughout his life. He sees our bodies in much the same way as rebuilding a car. He likes fixer-uppers. He likes to help transform people.

He wasn’t teaching my class last night but my instructor, Lisa, was wonderful. Walking into a room that’s 105 degrees knowing you’ll be doing yoga can be intimidating. She made my friend and I feel comfortable and encouraged us throughout the practice. I was expecting we would be doing a flow during the class but it is a series of holding 26 poses. Easier said than done in that heat! Bikram takes things head on and the heat actually helps you focus. It also helps you stretch. I should mention the room was not filled with 20 somethings like the night before but with 60-70 year olds who amazed me with their flexibility. Many afterward congratulated me on my first class and told me how the yoga had changed their lives.

Lisa was around afterward and was really helpful in terms of answering questions about poses and yoga in general. A great teacher. Everyone at the Bikram Yoga International Headquarters was so nice.

So far this week, this class was my favorite. The heat is definitely something you’d have to get used to but I like being able to focus on a series of poses that doesn’t change. I felt so good afterward. Some may like “Happy Yoga”, but I guess maybe I like a little challenge.

§ 2 Responses to a bear hug from Bikram

You are currently reading a bear hug from Bikram at 52 To Do.