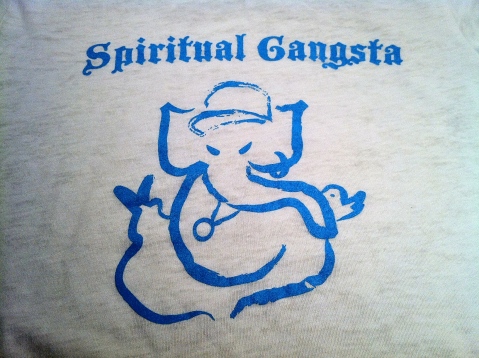 This shirt for sale at Maha Yoga says it all.  In case I’d forgotten, I’m back in LA. It was definitely the most unusual yoga class I’ve ever taken so I decided to sleep on it instead of making any rash judgments about it.

Ganesh, the “gangsta” featured on the shirt is the Hindu deity revered as the Remover of Obstacles. I would say the interpretation of Ganesh as a gangsta is a good example of Steve Ross’s sense of humor about yoga. He wrote a book called Happy Yoga. His whole philosophy centers around the fact that yoga should be as joyous and lighthearted as he encountered it in India, a side he feels was lost in translation as yoga traveled west. He’s pals with Eckhart Tolle and has been called “Yogi to the Stars” by InStyle magazine. My friend Amy, who treated me last night, often sees Jeremy Piven in her class channeling his “Ari Gold”.

Steve is a happy man. He exudes happiness. He started the class, not with quiet breathing exercise but by pumping up the hip hop and immediately getting into stretching. I was sweating 5 minutes in. I’m not going to lie, I felt like I didn’t know how to make sense of this class at first. It bothered me and felt like a bit of an affront to yoga. Then I remembered my airport experience and tried to just let the music be and let it push me through the poses. Music is a huge part of his practice…really loud music. You can barely hear him calling the poses. It’s good music though and I did find it energizing. The last 20 minutes of the class also involved music but more of a Gregorian chant soundtrack as we winded down. I found it actually helped me push my thoughts out and settle.

Throughout the class Steve would come by and smile and even knock me off balance sometimes when I was trying too hard. Maybe he could tell (as well as my husband does) that I often take myself too seriously.

I should say I was in an advanced class last night, so most everyone in there already knew the yoga poses. I knew most of them so I was okay. I could see a class like that being potentially dangerous for injuries as he doesn’t tell you how to correct the poses. It’s not about perfecting poses but having fun with your yoga.

I will probably go back and give it another try. I felt slightly disoriented throughout but also good somehow by the end. Maybe Ganesh, the gangsta, removed some obstacles for me.

§ 5 Responses to Yoga to the Snoop d-o double g

You are currently reading Yoga to the Snoop d-o double g at 52 To Do.