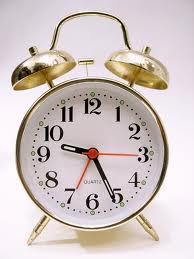 Now that I’m on my 5th day of waking up at sunrise, I thought I would try an experiment and see if I could wake up on time without an alarm clock. We banished all electronics from our room and gave it a shot. I guess my own internal clock must be working because I started waking up at dawn and then was out of bed right before the sun came up over the horizon.

It was such a great feeling vs what normally happens which is that I’m jarred awake by an alarm clock & then have to listen to it repeatedly go off since my husband is a “snooze” person.

The whole exercise got me thinking about alarm clocks and interested in learning more about where they came from. I think just even the name itself is pretty interesting, “alarm”. Not typically what you want to feel starting your day. In terms of its etymology, alarm comes from early 14c. from French alarme & Italian all’arme literally meaning “to the arms!”. It was extended in the 16c. to “any sound to warn of danger or to arouse”. Alarm clock is attested from 1690s (A Larum clock). Kind of interesting to think about in a modern context of getting up to go to work in the morning. 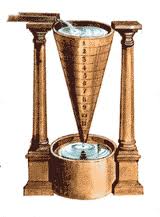 When my husband and I tried to predict where alarm clocks came from, we both said it had to be the Germans of course. Right? Didn’t they invent being on time? We were wrong.

Apparently alarm clocks can be traced back to the ancient Greeks in 400 BC who devised a water clock that would whistle or drop pebbles on a gong. Supposedly Plato used one.

The next iteration seems to be the village clocks in Europe, which we actually heard when we were in France, signaling the start of the day. One of the most famous is the clocktower in St. Mark’s Square in Venice which was built in 1493 by Rainieri. It signaled the start of day for the merchants of Venice.

The alarm clocks we’re most familiar with, user-set clocks, also date back to 15th century Europe. The first patented alarm clock was not the Germans but actually the French, believe it or not. French inventor Antoine Redier had the 1st patent in 1847. So we have the French to thank for our timeliness. Oh, the irony.

Another tidbit I found interesting occurred during WWII in the US. Like other consumer goods, production of alarm clocks shifted over to war work in 1942. This was probably the first evidence of the “alarm clock not going off” excuse because people had no new clocks to buy when theirs broke or became worn down. Many people would miss their shifts in the factories, blaming their alarm clocks being broken. Alarm clocks became one of the first consumer goods to go back into production before the war even ended to keep productivity on track.

We’re pretty much familiar with what ensued from that point on. Just about any sort of alarm clock you could imagine was made from radios to personalized clocks, to snoozing clocks to sound machines to apps on your mobile phones.

I’ll leave you with my personal favorite I found which was called the Tugaslugabed alarm clock from 1910. This alarm clock would literally pull you out of bed in the morning. You would place a loop around your toe and bolt the alarm clock to the floor. 8 seconds after the alarm went off it would start pulling you out of bed. I might have to track one of those down and try it on my husband!

You are currently reading All-arms clocks at 52 To Do.